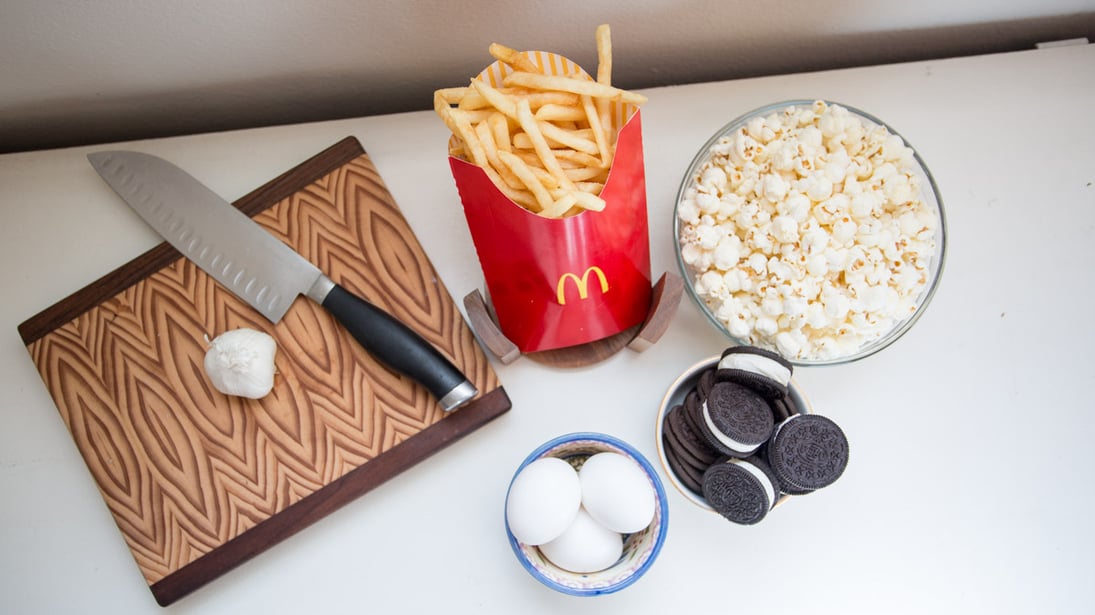 This article originally appeared on FoodBeast.com on Feb 22, 2019, by author Reach Guinto.

In the spirit of the recent gridiron fervor, we here at Foodbeast decided to create some competition of our own all in the name of cooking and a blown mindstate. The willing advocates of both, who within our ranks stepped up as players in one aptly titled Gridiron Green Games, were myself, Elie Ayrouth, and Analiese Trimber. For particulars, this was going to be a Chopped-style cooking competition between the three of us, with the winner awarded rightful bragging rights and having the best reason to celebrate with a big fatty.

To help us in this journey to a culinary Kumite was blüm Dispensaries, who provided some of that loud from Korova called "Gelato,” known for its fruity, dessert-like aroma.

Now before we get right into the heat of the competition, let's talk rules and other details.

Elie Ayrouth: Fearless and fierce in pushing the envelope, mastered the art of the one-eyed wink.

Dish: A trifecta of a meal that consists of Stoner Popcorn, a massive Big Mac Burrito and an OREO "Dunkaroos" dessert.

The following will be a time-stamped account of the events during the competition leading up to the announcement of the winner of Foodbeast's Gridiron Green Games.

1:00pm — Evan begins rolling the fatty with the aid of the Otto by Banana Bros., an automatic joint roller, courtesy of blüm. It's a nifty machine, really, fast-tracking rolling with ease and efficiency via a built-in grinder and apparatus that capably packs with Gelato flower.

1:20pm — After we all are done with setting up our designated cooking areas, the session begins. Elie is really hitting it extra hard. I hope he gets so blown that he won't be able to finish his dish.

1:33pm — Elie, the tallest of the contestants: "I don't understand how I get this little baby table and Analiese and Reach get tables that go up to their elbows. They're playin' me!"

1:40pm — At this point we're all starting to appreciate the Gelato, which had its benefits and setbacks. Its benefits being a greater feeling of singular focus and drive. Setbacks coming in the form of me forgetting where I left my phone and searching for it for a solid two minutes.

1:50pm — Evan: "So far we know Analiese is incorporating chipotle pepper paste into what looks like a sauce of some sort, while Elie and Reach are both still cutting onions. Clearly, Annie is in the lead."

1:51pm — I see Elie finishing up the chopping of his onions, then hear Evan warning anybody within earshot, "DO NOT TRY THIS AT HOME."

2:00pm — We're at the peak levels of determination. Evidenced by a sudden hush in the kitchen as the Gelato-induced laser focus hits all of us, putting us in an elevated work mode. Analiese's re-worked her mole sauce after she asked for feedback from other fellow Foodbeast and on-set photographer, Peter Pham, and I. Elie's ready to work the stove after forming his burger patties. I've just completed my OREO butter by running OREOs and coconut oil in the food processor for approximately three to four minutes (tbh it seemed like an hour).

2:15pm — I command Siri to set a timer for three minutes. The remedial machine somehow doesn't understand this so I am forced to set the timer manually. Evan walks by: "Um, it looks like you've set your timer for four hours right there." Well damn.

2:31pm — Evan: "About an hour in and I feel like Reach has got a really good groove going on, Analiese does, too. Elie, I dunno, I caught him dancing for a little bit, then he chopped an onion for like 20 minutes." At this point we all decide to re-up on some floral inspiration.

2:35pm — I'm hit with a sudden forgetfulness that leads me to suddenly have a brain fart about how to correctly input and attach the receptacle of the food processor. Analiese tries to help me with that. No dice. Eventually I figure it out after having lost some dignity and start working on my potato waffle, which becomes an ordeal after forgetting to put some key ingredients in it and almost having to start that over. At this point Analiese and I feel like we've fallen behind. Elie, on the other hand, is feeling confident: "Thirty minutes is all I need, baby!"

2:43pm — Elie's trio of dishes are starting to come together: the OREO Dunkaroos are done, Stoner Popcorn's on deck, and he's ready to start putting together his Big Mac Burrito. Analiese is impressing the room with her OREO mole sauce and made-from-scratch tortillas.

2:50pm — It's a mad dash as everyone is trying to plate their dishes. Our blown selves were laser focused on the task at hand: Don't run into each other and fuck up any dishes in the last moments. Did we incorporate every mandatory ingredient? Will we finish on time? Burning questions, like a cinder of lit flower, bore through our inner thoughts. Shit, that's just me being stuck.

3:00pm — Done and done. I survey the scorched battlefield of what used to be a kitchen and nodded proudly. Analiese's Stoner Breakfast Tacos were complete, presented immaculately on a marble cutting board. Pinterest would approve. Elie's full spread was on glorious display, showcasing his deft touch with multi-tasking and prioritizing. And me? I'm just relieved to get everything on a plate. But hey, we did the damn thing.

But before we get into the results, here are the completed dishes:

3:10pm — After Pete's finished taking photos of all the dishes, tasting begins. Knowing Elie's missing something, I'm keen on finding it until I exclaim, "YOOO YOU FORGOT THE FRIES!"

3:25pm — Everyone's turned in their scores for each dish and Evan begins to tally up the results. To celebrate our accomplishment, Analiese, Elie, and I all revisit the Gelato, which at this point has created a fixated state that's just right, not too heady, with just the appropriate amount of creative juices unlocked within us.

3:40pm — What's taking Evan so long? Is he disarming a bomb over there?

3:45pm — After what seemed like an eternity and a half, Evan reveals the results. Looks like the Gelato’s gotten to him, too. It's a two-way tie for the winner, between me and Analiese. Elie caught that L for not including the McDonald's French fries. But to be honest, I thought he had the tastiest item in that Big Mac Burrito. Flavor was straight up phenomenal and comforting. About the results, Analiese and I are feeling equal parts relief and shock. What are the odds? Yet, the total tally of scores seemed off to us. Following a meticulous survey of Evan's math, it was determined that it all didn't add up.

3:55pm — The new results, done with correct math, are revealed. Analiese and her Stoner Breakfast Tacos win! I knew it, though. Tortillas and mole made from scratch? Yeah I can't compete with that.

But hey, shout out to our HIGH-ly focused selves, though. I mean, just look at these winners:

Ignite Your Passion with Cannabis